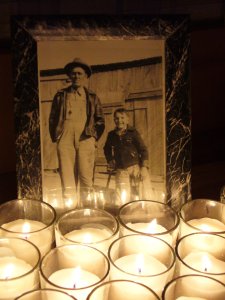 When I started this, I looked over all of the themes and visualized what I might be able to photograph if the theme came up at certain times of the year. So far, the luck of the draw has not worked to my benefit. Maybe that will work to get my creativity flowing more at some point.
This is a photo of my father as a small boy with his mother’s father (my great grandfather Williams). I had hoped to take “candlelight” in a church near Christmas, since that was not the case, I made my own shrine type setting for this favorite photo of these two important men in my life.
My Great-granpa Williams passed when I was 5 or 6, can’t remember for sure. I do remember him coming to visit once when my sister and I were very small and I have a photo of him visiting when we were even smaller. There are only two memories I really have of him, other than just knowing that he was kind and loving. He drank his coffee out of a saucer. I asked about that at some point later and was told that it was because he was used to boiling his coffee and it cooled quicker in the saucer so that he could drink it. The other memory is of Granpa Williams saying that he needed to take his teeth out and put them in a glass so that he wouldn’t bite us in his sleep! He must have had to share the bed with my younger sister and I. Bless his heart. I can’t imagine he got much sleep, since I just tried two nights of that with my own granddaughters in the last week or so. Funny memory.
Next week’s photo theme is “harvest”.

This entry was posted in dad, Photo of the Week. Bookmark the permalink.

2 Responses to photo week 3 of 39 — Candlelight