Here is what is going out today, Monday.  (My hand is hurting at the moment from all the writing and it doesn’t even look like that much in this little stack here.) 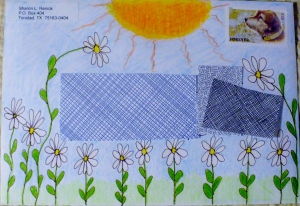 #1 I used colored pencils on this one

First is an envelope that I decorated by hand for a change.  I drew it in fountain pen and then colored it in with some of my colored pencils.    It’s not the greatest artwork, but I did try, and I kind of like it.  In fact, I like it enough, that I’ll even try to draw a picture again some day. 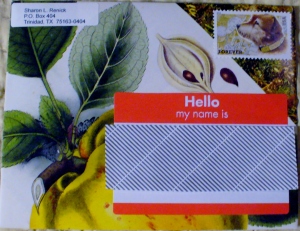 I actually could have shown the address on the second envelope because it’s going to a blog writer who posts his address on his blog.  I’m just so used to protecting the innocent, so to speak, that I covered it up without thinking.  Probably best to be on the safe side anyway.   Check out his blog “i still write”by clicking here, if you’d like to.

The third envelope is going to a new pen pal Louise in Sweden.  Louise has been waiting for this letter since last October.  Yes, last October.  Many of you may know that life got wild for my family late last year.  I even closed down the blog for a while.  I explained this to Louise.  Hopefully, she will forgive me for this delay.  If we had been writing each other for a while, it probably wouldn’t be such a problem, but this is my first letter to her.  Remember she’s my new pen pal.  So, we’ll see — she may never want to hear from me again.

which postcard is in this thing?

Now we’re into the postcards, even though this first one is in an envelope.  It’s a postcrossing card.  The individual requested it come in an envelope.  That happens sometimes — especially if they collect stamps or something like that.  Unfortunately, I forgot to take a photo of the postcard itself!  I hate it when I do that!  At least I put some fun postage stamps on it.  The envelope is one that was decorated by one of my granddaughters last summer when we made several together. 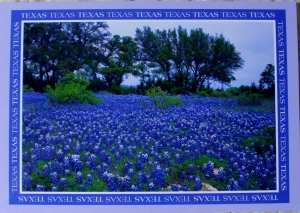 1st postcard -- a little darker than the actual postcard

The first actual postcard I’m showing you today is going to go to Marina in Croatia.  Hopefully, she won’t see it, but if she does, maybe she’ll be excited!  She recently left a comment on this blog.  I checked out her blog in return.  She was asking for people from all over the world to send her postcards.  She’s trying to get one from every country.  Of course she had one coming from the US already, but I offered to send one from Texas.  She emailed with her address and here it is!

The second postcard shown here is actually the second postcard I’ve sent to this postcrossing person.  The first one never arrived and it’s been so long since I’ve sent it, that time is about to run out on being able to register it (365 days).  So, I thought I’d send another one and see if we have better luck this time.  It’s going to the Ukraine.  I’ve got my fingers crossed.

our billboard in black and white

Postcard # 3 is going to a Postcrossing participant in the Netherlands.  They wanted to see something from the town I live in.  Well, there isn’t much to see, but I did happen to have this postcard of our one and only town related billboard.  Our town has one, count them, one school that has kindergarten through 12th grade; a combination water department/police station; a doctor’s office that’s only open a few days a week; a Dairy Queen; a gas station; a post office and a traffic light on the highway, which I forgot to tell them about.  That’s it.

last postcard going out on Monday

The last postcard going out today is headed to Finland.  The young lady it’s on its way to loves all things Japanese and Korean.  This was the only postcard I had that was Japanese related in any way whatsoever.  I have nothing Korean related at all.  I hope she likes it.  The photo on the front was taken in 1880.  The photographer is unidentified. 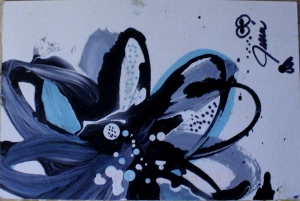 This is what I got in today’s mail!  Wow!  I love postcards like this!  It came from Julie (I think, it’s written in black marker and a little hard to read her name) in the good old United States of America.  The postcard says Reno, Nevada.  She says this was part of an old painting of hers that she cut up into postcards!  Beautiful!  I would have never thought of doing that!  I love to dabble in painting.  Of course, my paintings never really look like anything when they are done, but they could be quite interesting, just the same.  Love it!

This entry was posted in blogs I've found and loved, envelopes, in the mail, letter writing, post cards, postcrossing, stamps, writing. Bookmark the permalink.
%d bloggers like this: