Posted on September 16, 2013 by happenings on chaos ranch 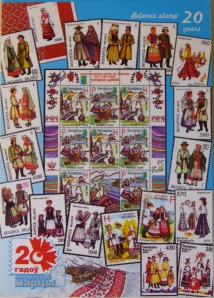 from Valentina in Belarus

You have probably realized by now, that one of my loves is postcards.  I love all things postal, actually.  Stamps are little works of art.  Letters are gifts of time and of the person who writes them.  They are history in the making.  I could go on, but I’ll spare you — for now.  All of the postcards I’ll be sharing today have the postal theme going for them.

The first card is from Belarus and it shows twenty years of postage stamps.  I’ve gotten several of these types of postcards over the last year or so.  Each one has shown different postage.  Fun!  This one shows native dress.  Valentina wishes me good luck and says “Happy Postcrossing :)”  Looking at her profile, she tells me that she like to read, playing the guitar, cycling and dogs.

from Anna in Russia

The second postcard today come from Anna in Russia.  I love these little mailboxes!  To me, it’s a happy little card.  She says the writing on front say’s “you – me, I – you”.  Anna also says that she lives in a small town near the mountains, with beautiful nature.  She loves animals and has two cats and a dog.  She also says that she really likes the postcards I make and that she hasn’t gotten any self-made cards through postcrossing yet.   From her profile, she hopes to travel around Europe by car one day!

from Nataliya in Russia

The third card is from a private swap through postcrossing.  I got an email message from Nataliya in Russia asking if I would be willing to swap one of the postcards I’d sent to someone else for this bicycle card.  I happened to have another of the postcards in question, so I said yes.  I didn’t even realize at first that it also shows the postal slot in the door too until I got it.  A happy realization!  She says that the bicycle is a very convenient means of transportation in Moscow.  That more and more people are purchasing bikes.  That you can also take a loaner bike from special parking places.  Her son rides a bike daily to work.  I wish they had something like that around here.

from Kira in the Ukraine

The fourth card is from Kira in the Ukraine.  It shows a wonderful group of mailboxes and a cat!  Love!  Kira says she has four cats that she loves very much.  She loves to read, travel and try out new things.  She’s fond of cooking and used to cross stitch (I used to too).  She says she hopes I’m having a good day and “May this summer be wonderful for you!”.  It’s dated June 8, 2013.  From her profile I learned that she works in the IT world.

from Marina in Russia

The last card today is from Marina in Russia.  Even though I love all of this group, this card is my favorite of the bunch!  Maybe it’s because of all the colors to the left of the mailbox.  I think that wall of notices would make a great postcard too.  Marina is from Moscow.  She says this is a typical mailbox in Russia.  She lives with her husband and dog, a collie.  They love to travel and try to go to a new place every vacation.  They were planning to go to Spain in September.  Hope they have a good time!

fun variety of stamps from Marina in Russia

I also love all the postage stamps she used!  You may want to click on the photo to enlarge this group.  The card is dated August 14, 2013.  Her profile says her job is space related, as in outer space.   Wow.

2 Responses to Postally Yours